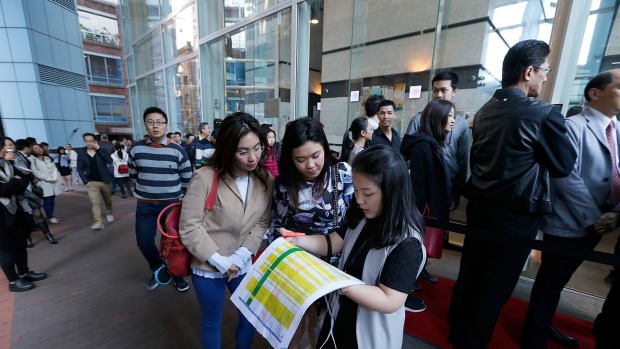 The lower Australian dollar makes property cheaper for foreign buyers and could increase the bubble prices being paid for apartments in areas of Sydney and Melbourne.

The dollar sank below US70¢ on Wednesday, for the first time since April 2009, and Deutsche Bank chief economist Adam Boyton​ predicts the dollar will keep falling to US60¢ by the end of 2016, and even past that into the US50¢ range.

“A lower Australian dollar would lower the cost for overseas investors to purchase new properties in Sydney which would put upward pressure on the price of new properties,” says valuer Herron Todd White.

Its latest red-flag report warned some apartment buyers in Sydney and Melbourne were paying too much for properties in competition with foreign buyers, leaving owners and lenders exposed if the market suddenly turned.

The report says “two-tier” markets are starting to form in capital cities where developers of units are heavily dependent on foreign and interstate investors rather than local demand.

The valuer said unit developments in Sydney such as Zetland, Waterloo, Rosebery, Mascot, Botany, Hurstville and Wolli Creek have been heavily marketed to overseas investors, particularly those from Asia who are sold units at higher prices.

In a rising market, the value of the units at time of settlement  may surpass the price paid. .But should the market peak or start to decline, then the value of these properties could dip below their purchase price.

Herron Todd White said Melbourne’s inner-city apartment market is two-tiered with foreign off-the-plan prices exceeding local transactions by 10 per cent  to 15 per cent in some projects. If overseas demand softens then developers will be more reliant  on domestic buyers who are not prepared to pay higher prices.

Certain suburbs, such as Balwyn North and Waverley, are popular with local and foreign buyers because of their schools and have experienced “dramatic price growth beyond their neighbouring precincts”.

“Non-local investors, who include foreign investors and interstate investors, are often not close enough to the market and are less informed. They could be happy to pay more than local buyers but it would be an issue if they are financed by an Australian bank,” Herron Todd White chief executive Brendon Hulcombe​ said.

“If an investor who paid too much needs to exit the market quickly, or their bank seeks to sell the property in a distressed loan situation, there is the propensity for losses to be realised which could end in tears for the owner, and their lender.”

“Ill-informed purchasers paying over the odds of course, also plays with the underlying property market dynamics that drive the value of individual units in a unit block. If there are sales driven from interstate or international investors at a higher price, certainly it can have an impact on the value of the local market.”

Sydney property prices have risen nearly 20 per cent in the past 12 months and Melbourne about 12 per cent. Overall foreign investment makes up 2 per cent of Sydney’s residential market, but certain areas have a higher concentration of foreign interests.

“I think sometimes as a country we talk about international purchasers driving the property market like they make up 20 per cent or so, and clearly that is not the case; they are a much, much smaller percentage of the overall market.

“However, in some certain geographic pockets there certainly are higher concentrations of international buyers, which might be impacted by a falling Australian dollar.” Mr Hulcombe said.

“Record prices are being sold off the plan – $1.8 million plus for penthouse levels – that are not supported in the established market,” Mr Hulcombe said.

Developer Dyldam closed the deal on the Auto Alley site on Wednesday.

Brisbane is not free from potential problems either, where the main issue is the oversupply of residential apartments in the last two years.

Herron Todd White’s research show there are at least three to four years of supply in the market, and seven to eight years proposed for development.

“Many units are being sold with 6 per cent rental guarantees for 12 to 24 months that has the potential to impact on the rentals. Hamilton, Milton and Fortitude Valley, in particular, have seen a substantial increase in supply over the past two years,” Mr Hulcombe said.

“It is only once many of the buildings in the pre-sale phase reach completion, will the true impact of this mooted supply be known. However, there are already early signs of increasing vacancy levels and downward rental pressure in some secondary buildings.”

Other concerns for Brisbane include house and land packages and townhouse projects in Brisbane which are heavily dependent on interstate buyers, such as the Ipswich area, the Moreton Regional Council and Logan City, with many packages sold at price points well above that supported by the local market.

written by by Su-Lin Tan